Competition in a hot air balloon?  Yes and what a great show it is!

It may sound incredible but you can compete with a hot air balloon. Balloons compete in thirty disciplines differentiated by the rules.  Most of these are distance or target flights. The best pilots reach the target with a centimeter precision after an hour´s wind driven flight from a distance of several kilometers.  The basic principle of flying a competition flight is to look for wind direction at different altitude levels. By climbing and descent the pilots try to find the best possible direction and speed to reach the goal.

Balloon competitions last approximately 3-7 days, depending on the competition category. There are usually 10 to 100 competing teams comprising 3-4 crew members. Main events include: national championship, which we are currently preparing, european and other continental championships, world championship and the world aviation games. Competitions are organized according to FAI international rules.

Each team has its pilot and possibly a co-pilot (navigator flying with a pilot in the balloon) and a ground escort comprising of a driver of the accompanying vehicle and another crew member. In modern competitions, we use the so-called loggers (enhanced GPS) which record the exact trajectory of the competition balloon flight in real time from take off to landing. These records are then evaluated by the organizers who count the resulst after each flight.

The organisation team comprises of:

Director of the competition – plans flights and flight disciplines

Measuring teams  - generally 3-4, depending on the competiton size, measure the distance of markers/competition marks on crosses

Safety officer – a person overseeing the safety during the competition

After the briefing, the competitor and the accompanying car head to the starting point (individual or joint - according to the director's decision), while the teams decide on the best tactics to accomplish the tasks. Balloon preparation for the flight takes about 10-15mins. Longer flights usually take place in the  morning after sunrise. Throughout the competition the crews accomplish subsequent assigned tasks, which are the same for all balloons. The length of each flight is usually 1 to 3 hours.

Ballons can safely fly only in the morning and evening hours. The reason for this is the stability of atmosphere when there is usually no convectional phenomena (not forming clouds / thermal) just after sunrise and before sunset. This is the difference between balloons and, for example, gliders - the convection glider uses convections for circulating in a rising stream, thanks to which it goes up in altitude. These phenomena are dangerous for balloons.

Marker – narrow textile banner about 2 metres long with a small weight on one end.  Pilot throws the marker at a cross to score.  The distance of the marker from the centre of the cross is measured.

Cross or target – textile cross approximatelly 10×10 m in size, laid out on the ground on the given coordinates.

Flight disciplines – tasks, which must be accommplished during the flights and which are described in the rules.  Sometimes these are specified by the director of the competition.

What is competed in

The aim of the competition is to collect as many points as possible in individual disciplines. The pilot's victory in the discipline is valued at thousands of points, further evaluations of other pilots are counted in proportion.

In individual disciplines, most often a marker is thrown at the cross (often with accuracy in centimeters). There are also disciplines that are only recorded in the logger, whether with one point or whole trajectory.

There are numerous flight disciplines.  The most common are:

Pilot declared goal : The pilot chooses the destination coordinates (in 3D or on the ground), often before the end of the previous discipline or before the start. The task is to reach the target and record the closest position to the logger.

Judge declared point: The competition director will announce the coordinates of the target (in 3D or on the ground).

Hesitation waltz : The pilot selects the most appropriate target in the discipline according to his flight or in connection with other disciplines.

Hare and Hounds: Pilots chase a special balloon (fox) that lands at one moment and untie the cross. The task is to reach the cross as accuratelly  as possible and score through the marker.  Pilots often deal with other disciplines during the "hunt" and they must be careful not to lose or overtake the fox.

Race to Area: The task is to reach the marked area as quickly as possible.

Elbow: The goal is to make the greatest possible change in the flight trajectory between three points.

3D task The goal is to achieve the longest trajectory in the 3D space, often in a circle or beween circles 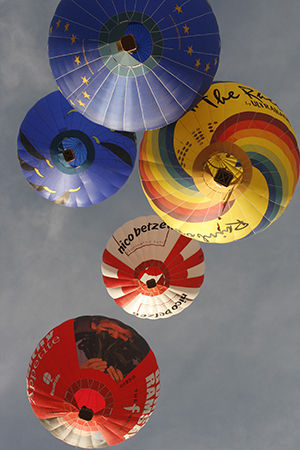 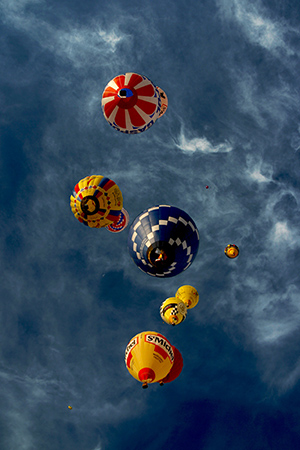